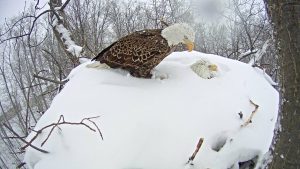 It was a scene that warmed many hearts.

A bald eagle incubating two eggs in a falling snow, unwilling to budge as the nest turned white. As the flakes piled high, the bird was blanketed. Only its head could been seen, periscoping above the snow.

The images captured in early March on the Pennsylvania Game Commission’s Eagle Cam spotlighted the sacrifices parents make, and showed a lot about the resilience of bald eagles, and why they have been so successful in Pennsylvania and elsewhere.

And as the Game Commission releases its annual mid-year report on bald-eagle nests statewide, the preliminary numbers represent an all-time high.

So far this year, 277 bald-eagle nests have been documented in Pennsylvania, with nesting eagles present in at least 58 of the state’s 67 counties.

That shatters the 2014 preliminary number of 254 nests, which also was an all-time high. And more nests remain to be counted as the year goes on.

“Like many Pennsylvanians, I remember a time when bald eagles were absent just about everywhere in the state, and it truly is astonishing how things have turned around,” Hough said. “Through our reintroduction program, our protection of eagles and effective management, we’ve gone from three nests statewide to what soon could be 300, all within the span of my career with the Game Commission.

“It’s an accomplishment of which all Pennsylvanians can be proud,” Hough said.

The Game Commission urges all eagle nests be reported.

Even if nests were reported in a previous year, it’s important to report them again if they were used again this year, said Patti Barber, a biologist with the Game Commission’s Endangered and Nongame Birds section.

People who have reported a nest as active in a previous year might not realize they should report back each year to help the Game Commission track the population over time, Barber said. It’s one of the challenges of documenting bald-eagle nests as the population of eagles continues to grow. Also, folks might assume bald eagles they’re seeing are associated with long-established nests, as opposed to new pairs setting up territories near established nests, Barber said.

Reports of bald-eagle nests always are appreciated. Perhaps the easiest way to report a nest is to contact the Game Commission through its public comments email address: pgccomments@pa.gov, and use the words “Eagle Nest Information” in the subject field. Reports also can be phoned in to a Game Commission Region Office or the Harrisburg headquarters.

“Even if nests are well known locally, please don’t hesitate to report them,” Barber said. “You might be adding a new nest to the list, or making certain that one reported in a previous year is accurately counted this year.”

Each year, bald-eagle nests continue to be reported as the year goes on. In 2014, for instance, the preliminary number of 254 nests ballooned to 273 nests by year’s end. Other years have produced similar results.

But the mid-year numbers are an accomplishment in their own right, Barber said.

In 1983, when the Game Commission launched a seven-year reintroduction program, only three bald-eagle pairs were nesting statewide. Today, there are 277 with more remaining to be counted.

“We so often refer to the story of the bald eagle as one of the greatest wildlife success stories out there, but it just keeps getting better all the time,” Barber said. “People are fascinated with eagles, and their chances to see them and watch them are better now than they’ve ever been.”

Hough said the nearly 1.4 million people who viewed the Game Commission’s Eagle Cam online this year illustrate the connection people have with bald eagles. And that connection is an important part of the bald eagle’s success, he said.

“Without people who care, we wouldn’t have nearly the number of bald eagles we have in Pennsylvania today, and we probably wouldn’t have them at all,” Hough said. “When bald-eagles were in decline, it was people who led the way for their recovery. We joined to clean up the environment, entrusted wildlife agencies like the Game Commission to jumpstart restoration of eagle populations, and placed priority on protecting eagles to give them a chance to take hold.

“The rest we left up to the eagles, and they continue to prove they’ll continue to be here for more and more Pennsylvanians to enjoy,” Hough said.

Article by the Pennsylvania Game Commission.