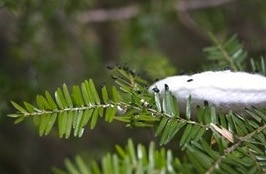 Staff released 50 of the small black beetles — a natural predator of the adelgid — as part of the Hemlock Restoration Initiative, a cooperative effort launched by the N.C. Dept. of Agriculture and Consumer Services in March 2014 designed to restore North Carolina’s hemlock trees to long-term health.

The hemlock woolly adelgid is a tiny, aphid-like insect that derives its name from the covering of wool-like wax filaments that it forms as it matures to protect itself and its eggs from natural enemies. A native of Asia, the adelgid has decimated hemlocks across western North Carolina since it was discovered in the state in 1995. The insect settles at the base of a needle and sucks out juices, causing bud mortality, twig dieback and defoliation. Under high infestation rates, the adelgid can cause tree death in as little as four to seven years.

This particular species of beetle, Laricobius nigrinus or Lari beetle, controls adelgids well because it is a voracious predator that feeds exclusively on woolly adelgids. Lari beetles, which are native to the Pacific Northwest, are winter feeders and can eat up to six adelgids per day before laying 200 to 400 eggs in the adelgid egg sacs. Each larva can consume 200 to 250 adelgid eggs or crawlers before they pupate in June. Once established, Lari beetles can advance up to 2 miles per year.

“Right now the trees that were chemically treated are very healthy and growing vigorously but are still infested with adelgids at low densities, while the untreated hemlocks in the same stands are highly infested with adelgids and have more than a 50-percent leaf defoliation and twig dieback with most of the lower branches dead,” said Joe Tomcho, a conservation technician with Commission who helped with the initial treatments. “We are hopeful that the Lari predator beetles will take hold and provide long-term control of the adelgids and help save the remaining hemlock stands on our game lands.”

Tomcho’s optimism is based, in large part, on research conducted by Dr. Richard McDonald of Sugar Grove, N.C., that shows the predator beetles seem to be effective in controlling adelgids, eating more than 90 percent of them in areas where the beetles have been released.

McDonald, of Symbiont Biological Pest Management, has spent the last decade studying the effects of Lari beetles on adelgids in several study plots in the Grandfather Mountain area. According to Tomcho, McDonald is seeing good regrowth of adelgid-infested hemlocks at several of the earliest release sites. Since 2008, hemlocks have stopped dying in the 5,000-square mile release area around Grandfather Mountain.

“Even better, McDonald’s research is showing that the trees actually have been growing since 2008,” Tomcho said.

Funding of the first release of beetles last month came from a $75,000 grant to WNC Communities, an Asheville-based nonprofit selected by the N.C. Dept. of Agriculture and Consumer Services as its primary partner for the Hemlock Restoration Initiative.  The goal of the initiative is to use three primary treatment and restoration methods to control the woolly adelgid: chemical treatment to stabilize the trees; predator beetle releases for long-term adelgid control; and a search for trees that are either naturally resistant to the impacts of the adelgid or can tolerate mild infestations so they can survive to maturity.

“Hemlocks play an important ecological role in providing shade and temperature regulation for trout streams, songbird nesting and cover for a variety of wildlife,” Tomcho said. “Hemlocks also are an important nursery and landscaping species and add to the diversity of trees seen from the many view sheds across the mountains.”

McDonald agrees and has been working with Jonathan Hartsell, executive director of the Blue Ridge Resource Conservation and Development Council in Bakersville, to educate the public on predator beetle programs, including proper collection and release techniques.

“It is vitally important that we do all that we can to protect this precious hemlock ecosystem,” McDonald said. “We need to get the word out about the program, and get people trained correctly on the proper collection and release techniques and begin making strategic releases.”

For more information about the beetle release program and the hemlock woolly adelgid, visit www.drmcbug.com.