Posted on Monday, February 1st, 2016 by aadmin | Comments Off on Prescribed Burns Benefit Wildlife and their Habitats 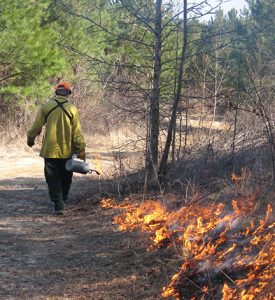 Where there’s smoke, there’s fire. And where there’s fire, at least on a N.C. Wildlife Resources Commission game land, there’s usually a prescribed burn — one of the best and most cost-effective methods of managing habitat for wildlife.

A prescribed burn, or an intentional burning of vegetation under strict and specific circumstances, helps restore and maintain wildlife habitat. It is a cost-effective tool that Commission staff uses to create and maintain suitable and ample wildlife habitat in old fields, native grasslands and open-canopy woodlands on game lands throughout the state.

Wildlife foresters, technicians and biologists conduct the majority of prescribed burns, also called controlled burns, between January and March when trees are less active metabolically. But they continue some burns into spring and summer because warm season burning provides for better control of young hardwoods, which will re-sprout from the base if repeated burns are not conducted.

Burning encourages production of native grasses and herbaceous vegetation, which provides valuable food and cover for a wide variety of wildlife species,” said Isaac Harrold, the Commission’s lands program manager. “Animals like deer browse on groundcover. Quail and songbirds utilize seed produced by native plants. Quail as well as other species, such as turkeys and rabbits, use the groundcover for nesting.”

In fact, many of North Carolina’s declining or rare wildlife species are adapted to and found only in fire-dependent habitat, which underscores the need for the Wildlife Commission to continue its prescribed burns program across the state.

Red-cockaded woodpeckers, Bachman’s sparrows, golden-winged warblers, painted buntings, timber rattlesnakes, northern pine snakes and gopher frogs are just a few animals that benefit from the early successional habitat created from a prescribed burn. Each of these animals is listed as an endangered or threatened species or a species of special concern in North Carolina because of declining populations.

“Early successional habitats typically have open understories with a mix of grasses, legumes, wildflowers, vines, shrubs and saplings, all of which provide excellent food and cover for many species of wildlife,” Harrold said. “After we burn an area, we typically see regeneration of grasses, small shrubs, and other vegetation within a few weeks and animals returning to the burn site shortly after.”

To an untrained eye, the land after a prescribed burn can look bleak — a smoldering, bare landscape in which no animal could have survived. That misperception, however, can’t be further from the truth.

“A lot of times when we burn, we get calls from people who are concerned about animals not being able to escape the fire, particularly during turkey hunting season in the spring,” Harrold said. “We use burning techniques, such as flanking fires and slower-moving backing fires, to ensure that animals have time and room to escape.

“Wildlife evolved over the centuries with fire and they’ve learned how to avoid and escape fire.”

Most animals leave the area of the fire and in the case of many reptiles and amphibians, burrow in the ground until the fire is out.

“The overall benefit that wildlife receives from a prescribed burn far outweighs the small amount of wildlife that is lost,” Harrold said.

In addition to using prescribed burns to create valuable wildlife habitat, Commission staff uses prescribed burns to help reduce high levels of forest fuels that can cause deadly wildfires and to control disease and insects, such as brownspot disease in long leaf pine seedlings and cone beetles in white pines.