Recently Protected Jewel on the Crown of the Roan

Posted on Tuesday, December 29th, 2015 by aadmin | Comments Off on Recently Protected Jewel on the Crown of the Roan 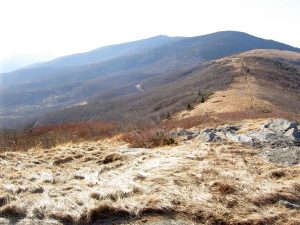 We finally sealed the deal on a treasured 76-acre piece of the Roan landscape just below Carver’s Gap, a popular access point for the Appalachian Trail! In so doing, we have protected scenic views and hiking experiences for future generations to enjoy along the trail — and honored a civic leader of Spruce Pine who committed a lifetime to serving his rural mountain community.

“This tract has been a priority for SAHC for over 40 years, and we are thrilled to be able to conserve it,” said Carl Silverstein, SAHC’s executive director. “It was the last privately owned tract before you get to Carvers Gap, and because of its location and frontage on NC Highway 261, it was at high risk for development. We are so pleased that the landowners chose to sell to SAHC so that the land — and hiking experiences along the AT — will be preserved for the future.”

During the summer of 2013, over 3,500 people visited the grassy balds in the Roan by accessing the Trail via Carvers Gap. The recently protected, bowl-shaped property is highly visible from the AT at Jane Bald and Round Bald, lies approximately 900 feet south of the Trail at Engine Gap, and is surrounded by Pisgah National Forest.

Former SAHC Trustee and President (and avid Appalachian Trail enthusiast) Joe DeLoach added, “This tract was one of the closest private lands to the Appalachian Trail in the Roan Highlands, in clear view between Jane Bald and Grassy Ridge.  Development would have not only been a visual intrusion, with its proximity it could have resulted in the sounds of civilization reaching the ridgecrest. Protection of this longtime conservation priority ensures that the user will continue to experience mountain scenery and countryside views along one of the most heavily used sections of the AT.”

The natural features on the property include globally significant resources whose protection is valued by federal, state and private partners throughout the region. The tract is part of the Roan Mountain Massif Natural Area, which contains one of the most outstanding clusters of rare species and natural communities in the Southern Appalachians, and lies within the Audubon Society’s Roan Mountain Important Bird Area. Clean headwater sources and trout streams originate on the tract, and the rushing waters of Carvers Gap Creek, classified as Trout waters and High Quality Waters by the NC Division of Water Quality, run through it.

Portions of the tract have also been historically farmed, used for raising Black Angus cattle and, more recently, Christmas trees. Once owned by Dr. William Davenport, a prominent dentist in the mountain town of Spruce Pine, the land resonates with memories for former landowners Paul and Diane Pritchard, who sold the property to SAHC.

Diane’s father, Dr. Davenport, purchased the tract in 1946 and began breeding Black Angus cattle. Although he did not live on the property, he visited frequently and cherished the respite it afforded — a special place to get away from the busy demands of his career, to relax and enjoy nature. He selected a tenant family to live in a cabin on the property and care for the cattle, and he continued to take a regular, active role in managing the herd.

“He would go up to check on them often,” recalls Diane, who enjoyed accompanying her father on such visits and even gave pet names to the gentle cattle. “It was a place away from the hustle and bustle, the calling of needs and wants in town.”

Dr. Davenport continued to breed and raise cattle on the property until 1958. For a long time the land lay fallow, then the Pritchards inherited it and began farming Christmas trees on a lower portion of the tract. After evaluating many possible options for the land, they recently decided to sell to SAHC so that it could be permanently conserved.

“At this stage in our life it makes sense,” said Paul. “Twenty five years ago, we wouldn’t have wanted to sell it because of the sentimental value – the connection to Diane’s father. He was a great man and a great father – one of the finest men I’ve known.”

SAHC purchased the Dr. William Davenport tract using a combination of generous gifts and loans from private philanthropists. A portion of the transaction costs were supported by grants from the Community Foundation of Western North Carolina and the Conservation Trust for North Carolina. We are actively working to raise funds to pay off the loan we took out in order to purchase the tract.