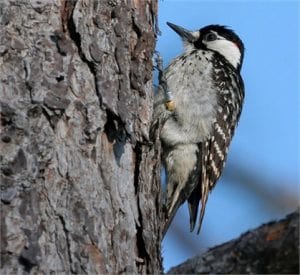 The red-cockaded woodpecker is a relatively small member of the woodpecker family but its habitat requirements are anything but small. The federally endangered bird prefers vast acres of longleaf pine forests — habitat that has declined by about 97 percent since European settlement.

Thanks to a Safe Harbor Agreement entered into by the N.C. Wildlife Resources Commission and Orton Plantation Holdings, LLC, in November, more than 8,400 acres of open pine forest in Brunswick County will be managed and enhanced to benefit many native wildlife species, with an emphasis on the red-cockaded woodpecker. Orton Plantation is owned by conservationist Louis Moore Bacon.

As part of the agreement, Orton Plantation will manage the property to make the habitat more suitable for red-cockaded woodpeckers. Orton Plantation Property Manager Dillon Epp will conduct prescribed burns on a regular basis to control hardwood encroachment, create an open pine forest and restore the native longleaf pine ecosystem throughout the property.

While red-cockaded woodpeckers prefer longleaf pine, they nest in other pines, such as loblolly, slash and pond. Orton staff has thinned overstocked pine stands and is in the process of converting nonnative slash pine trees, as well as native loblolly pine, to longleaf pine.

They also are allowing the remaining trees to grow older so that red-cockaded woodpeckers will have more roosting and nesting options. The red-cockaded woodpecker is the only woodpecker species in North America that excavates nest cavities in living pine trees instead of dead ones. The older the trees, the more attractive they are to the woodpecker. A small number of these old trees get a fungus that softens the inner heartwood, making it easier for the woodpeckers to excavate their cavities.

Loss of Longleaf Pine Habitat
According to U.S. Forest Service data, the longleaf pine ecosystem has been reduced to three percent of its original expanse, which at one time covered 90 million acres across the southeastern United States.The pine stands that remain today are not nearly as old as what woodpeckers need.
Because of the lack of old pines and the loss of open pine forests, red-cockaded woodpeckers have declined by about 99 percent.

“For example, after an RCW Safe Harbor Agreement has been signed, if additional red-cockaded woodpeckers move onto the property, the habitat these additional birds are using can be cut or removed at any time the landowner wishes,” said John Carpenter, the Wildlife Commission’s RCW Safe Harbor biologist. “By entering into a Safe Harbor Agreement, landowners are better able to continue their routine management activities despite having a federally listed species on their property.”

The ability to conserve habitat while managing property without too many restrictions makes the Safe Harbor Program an appealing partnership opportunity.

“This Safe Harbor Agreement helps to establish a close working relationship between Orton Plantation and the Wildlife Commission,” Epp said. “We look forward to exploring other mutually beneficial opportunities to expand this important relationship with a critical state partner on behalf of native wildlife.”

“While some people get upset when they see a thinned pine stand, this type of habitat is very beneficial not only for red-cockaded woodpeckers, but also for many other native wildlife species, such as bobwhite quail, Eastern bluebirds, red-headed woodpeckers, deer, gopher frogs and fox squirrels,” Carpenter said. “Many species of native grasses and wildflowers also do well in this type of habitat, particularly when prescribed fire is used on a regular basis, because fire stimulates and promotes their growth.

“Without fire, many native animals and plants would disappear due to lack of food, habitat and conditions needed for them to exist.”

Bacon’s addition of Orton Plantation pine forest to the Safe Harbor Program marks the single largest tract of land currently in the program and reinforces Bacon’s reputation as a conservationist known for protecting environmentally sensitive lands across the country.

“It’s really nice to work with a landowner like Mr. Bacon who is so passionate about wildlife management of all kinds,” Carpenter said.“The addition of this Safe Harbor Agreement on Orton Plantation Holdings is particularly important because of its size and because of its proximity to other nearby pine forests in Boiling Springs Lakes and Military Ocean Terminal Sunny Point in Southport where there are good populations of red-cockaded woodpeckers. Orton will be contributing significantly to the sustainability and possible growth of southeastern North Carolina’s RCW populations.”

For more information on nongame and endangered wildlife in North Carolina, visit the Commission’s Conservation page.