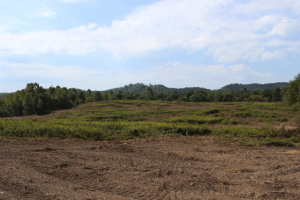 To convert these grass- and shrub-lands, which often consist of exotic and invasive plant species, back into native forests, a modified version of the Appalachian Regional Reforestation Initiative’s Forestry Reclamation Approach is used. This approach involves unwanted vegetation removal, soil decompaction, and native tree and shrub planting. The existing vegetation is removed by chemical or mechanical means or a combination of both. Soil compaction is the main reason why these sites cannot naturally regenerate and are stuck in a state of arrested natural succession. To alleviate the compaction, a large bulldozer equipped with a 3-4’ ripping shank cross-rips the site on an 8’x8’ spacing. Native hardwoods, including oaks, black cherry, The American Chestnut Foundation’s potentially blight-resistant Restoration Chestnuts, and wildlife shrubs are then planted.

The original intent of the surface mine aspect of the Cerulean Warbler Appalachian Forestland Enhancement Project was to reforest mine land acres in each of the 5 states involved in the project.  However, after further consideration by Natural Resources Conservation Service (NRCS) offices and partners in West Virginia, Pennsylvania, and Maryland, a decision was made to focus the entire 1,000-acre reforestation goal in Kentucky and Ohio to achieve a greater landscape-level impact on the ground. In 2016, three private landowners in Kentucky and three in Ohio enrolled in the program, with one project from each state determined as suitable.

Outreach to surface mine land owners is difficult. While we used the NRCS’s traditional outreach strategies and disseminated electronic and hard copy advertisements to University of Kentucky extension offices and at community events and other venues, these methods were largely unsuccessful. The landowners who did enroll were all introduced to us by NRCS or Division of Forestry personnel or through other partners.

The Kentucky project (20 acres) is located in Knox county, near Barbourville, at a site close to lands enrolled in the NRCS’s Wetlands Reserve Program. Reforesting this site will build on existing conservation efforts to create a more resilient ecosystem. The mined site was previously dominated by sericea lespedeza, autumn olive, and native species uncommon for mountain ridges. In September, the woody vegetation was mechanically removed by a large bulldozer with a brushing blade. The site will receive an herbicide application in the fall and plantings in the spring of 2017. 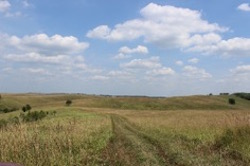 The Ohio project (120 acres) is located in Harrison county, near Cadiz, on a site that is currently leased for hay production. After utilizing the land for hay, the landowner thought returning the site to its formerly forested state was the “right thing” to do. Because of the lack of woody plants, the project site only needs an herbicide application to control the unwanted vegetation, which reduces the overall project cost.  This project is still awaiting final approval from the NRCS, but it is anticipated that the herbicide application will take place this fall with tree and shrub plantings following in the spring of 2017.

Throughout the fall and winter of 2016, we will use a more targeted approach to solicit new landowners and target project sites in Kentucky, while potential new project sites in Ohio have already been identified. Landowner outreach efforts in Kentucky will focus around the Pine Mountain area, where the Cerulean Warbler and Golden-winged Warbler’s Focal Areas overlap. Reforestation in this area will capitalize on existing efforts by the Kentucky Natural Land’s Trust to create better connectivity between protected lands.