Researchers Try to Balance Competing Needs of Wildlife and Energy

Posted on Tuesday, February 18th, 2014 by aadmin | Comments Off on Researchers Try to Balance Competing Needs of Wildlife and Energy 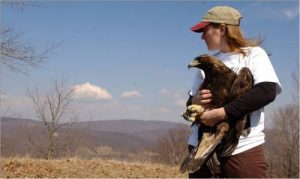 Ridge tops and high places are perfect locations for wind turbines to capture breezes that help power our society. Unfortunately, they are also ideal places for golden eagles to soar. Researchers from West Virginia University and Penn State University are trying to figure out the best ways to make sure the eagles can fly and the energy can be generated.

They defined risk as the probability of golden eagles encountering wind energy turbines. To do this, they overlaid models of the landscape features that suit both the birds and the energy producers.

“Economic development creates complex problems when juxtaposed against wildlife conservation,” said Tricia Miller, who recently earned her Ph.D. in ecology from Penn State and is a wildlife biologist in WVU’s Division of Forestry and Natural Resources.

Miller and colleagues from both WVU and Penn State predict risk to the wildlife before construction, allowing turbine sites to be relocated a short distance away to areas with similar energy generation potential but presenting lower risk to eagles. For turbines already built in high-risk areas, scheduling a shut-down period during peak migration times would also reduce the risk to golden eagles, with minimal loss of energy generation potential.

“Conservation biology seeks to understand and manage threats to species, populations, and ecosystems that can be brought on by development,” she added. “Biologists traditionally focus exclusively on ecological solutions to these problems. However, advancements in conservation are likely most effective when they focus on solutions that consider the needs of both wildlife and industry.”

A holistic perspective recognizes that although species select resources to improve their survival and fitness, industries also must do essentially the same thing for their economic bottom line and, thus, survival, according to Miller.

Topography has a strong influence on how wind moves across the landscape. Updrafts are generated from wind hitting topographic features such as hill sides, which disrupt horizontal movement of wind. As a result, in the Appalachians and elsewhere, eagle flight and turbine placement are both strongly influenced by topography”

“In the Ridge and Valley physiographic province of the central Appalachians, the ridges are long and narrow,” Miller said. “Because of the narrowness of the ridges, you see a large degree of overlap in selection by both eagles and wind energy. In other regions, like the Allegheny Mountains, the topography is much more variable. There are larger expanses of flat areas where wind moves more evenly across the landscape. Wind like that is good for turbines but not for eagles. There are also edges hills where updrafts occur, which is better for eagles, but not so great for wind energy.”

To help determine where the eagle-friendly topography is, Miller and her colleagues attached GPS tracking devices produced by Cellular Tracking Technologies to golden eagles that were captured on the wintering grounds in Pennsylvania, West Virginia and Virginia. The devices collected one data point every 30 seconds in Pennsylvania. “In addition to location, the units provided altitude, speed, and heading, so we could determine if the bird was in flight and how high it was flying,” Miller said.

According to Miller, this spatial comparison of competing resource selection models—examining eagles’ needs and those of the wind energy industry—is a useful conceptual way to understand risk across multiple spatial scales and for other species beyond eagles.

“This approach allows biologists and energy developers to visualize and quantify overlaps in resource selection among competing groups and to identify mechanisms to reduce competitive interactions and thus risk to wildlife and to industry,” Miller explained. “Risk abatement that balances competing ecological and industrial goals is an important step toward safer development of all types of energy and economic growth and it may allow developers to analyze economic viability of projects.”

Miller’s advisers were Robert Brookst a professor of geography at Penn State, and Todd Katzner, a research assistant professor of wildlife and fisheries resources at WVU. They are among Miller’s co-authors on an article describing their process and findings that was recently published in Conservation Biology.

The team’s research was funded by the United States Department of Energy, the Pennsylvania Game Commission, the Virginia Department of Game and Inland Fisheries, and the Charles A. and Anne Morrow Lindbergh Foundation.