Posted on Tuesday, January 1st, 2013 by aadmin | Comments Off on RGS Works with Others to Expand Marinette County Habitat Management Area 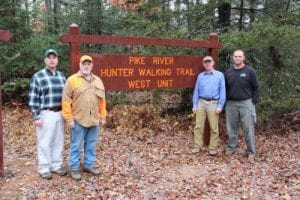 The popular Pike River Ruffed Grouse and Woodcock Management Area, south of Dunbar in Marinette County, has been expanded by an additional 500 acres thanks to the cooperation of several organizations interested in increasing opportunities for ruffed grouse and woodcock. The original 1675 acre management area was established in 1988 as a cooperative project between the Marinette County Forestry and Parks Department, the land manager’s of the area, and the Ruffed Grouse Society (RGS).

In 2010, the Dunbar Sportsmen’s Club presented a proposal to expand the Pike River area to the west, as the area had additional habitat management potential and could provide additional opportunities for recreational hunting.

As noted by Mark Grandaw, board member of the Dunbar Sportsmen’s Club, “Our club is proud to be a part of this project.  It is only with the support of these many organizations that we have been able to conduct this valuable habitat improvement work on the Marinette County Forest.”

RGS Biologist Gary Zimmer states, “Over the past two years a new looped walking trail was established in the expanded area along with a new parking area.  In addition, pockets of upland alder were sheared to regenerate habitat specifically for woodcock and existing openings were maintained to improve both spring breeding sites for woodcock and summer brood rearing habitat for ruffed grouse.”

Ruffed grouse and woodcock are dependent on young forest habitats that provide the secure cover they need to escape from predators.  This type of habitat requires periodic disturbance of some form in order to remain quality habitat for these birds. Woodcock in particular key in on dense habitat in the vicinity of moist soil areas where they can find earthworms, their primary food source.

This article was produced by the Ruffed Grouse Society.