Posted on Friday, December 9th, 2016 by aadmin | Comments Off on Secretary Jewell Announces Decision to Protect 75,000 Acres in Eastern TN 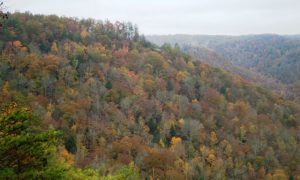 At the request of the State of Tennessee, the Department of the Interior has agreed to designate approximately 75,000 acres of mountain ridgelines as unsuitable for surface coal mining operations. Today’s action helps protect a spectacular area of eastern Tennessee that is critical to the region’s tourism and outdoor recreation economy, provides valuable fish and wildlife habitat and supports a healthy watershed.

In its petition, the State said coal mining in the North Cumberland Wildlife Management Area and Emory River Tract Conservation Easement would be incompatible with existing local and State land use plans and programs, and that such mining would result in significant damage to natural systems and cultural, scientific and aesthetic values.

“Today’s action honors Tennessee’s request to protect the Cumberland Plateau’s majestic forests, mountains and streams for future generations,” said Secretary of the Interior Sally Jewell. “This is great news for the hunters, anglers, hikers and birders who come, year after year, to enjoy this incredible place. I applaud the State for their forward-looking vision that will help strengthen the local economy and help protect a critical watershed.”

The area is an important wildlife corridor, providing habitat for black bear, elk and numerous songbirds like the cerulean warbler. The New and Emory Rivers also run through the designated area and provide clean drinking water to thousands of Tennesseans. The designation does not impact existing mining operations within the area.

“Tennessee appreciates the thoughtful approach applied by the Department of the Interior’s Office of Surface Mining Reclamation and Enforcement throughout their deliberate handling of the state’s Lands Unsuitable for Mining petition filed in 2010 for specific mountain ridgelines in the Northern Cumberlands. Their final decision provides protection for particular high-elevation ridgelines in this region and also affords increased potential for beneficial remining that was both responsive to our input and measured to achieve optimal conservation and recovery on important public lands,” said Tennessee Department of Environment and Conservation Commissioner Bob Martineau.

“Secretary Jewell’s decision to approve the State of Tennessee’s petition to protect over 550 miles of ridgetops in Anderson, Campbell, Morgan and Scott counties as unsuitable for mining will help safeguard our state’s mountains without affecting mining operations in other parts of these counties or elsewhere in Tennessee,” said U.S. Senator Lamar Alexander. “This means these ridgetop landscapes – and the rivers, streams and forests that surround them – can continue to bring millions of tourists and thousands of jobs to Tennessee.”

Tennessee’s 2010 petition requested that Interior’s Office of Surface Mining and Reclamation Enforcement (OSMRE) declare a 1,200 foot corridor (600 feet on each side of the ridgelines) in the North Cumberland Wildlife Management Area and Emory River Tract Conservation Easement as unsuitable for surface coal mining operations. The petition area encompassed about 67,326 acres.

Based on public comments and a robust evaluation, including improved aerial mapping technology that more accurately reflected the State’s objective, OSMRE is designating 74,968 acres associated with 569 miles of ridgeline as unsuitable in Anderson, Campbell, Scott, and Morgan counties, Tennessee. The petition area is unique in that it creates a horizontal protection zone along individual ridgelines. A map of the areas described in the petition is available here.

The Record of Decision makes a limited exception for remining activities, restricted to proposals that will provide environmental benefits, such as reclaiming abandoned mine lands by eliminating highwalls and reducing the impacts of acid mine drainage and residual sedimentation. In reviewing remining proposals, OSMRE must consult with other parties, including the State of Tennessee, the U.S. Fish and Wildlife Service and the National Park Service, to determine whether any proposed remining action is compatible with the designation.

OSMRE regulates coal mining in Tennessee under the Surface Mining Control and Reclamation Act of 1977. Section 522 of SMCRA allows any person having an interest which is or may be adversely affected the right to petition the regulatory authority to have an area designated as unsuitable for surface coal mining operations. 30 U.S.C. § 1272(c).

Today’s Record of Decision can be found here.

News release by the Department of Interior.