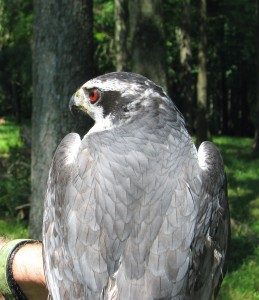 Wildlife biologists with the Maryland Department of Natural Resources (DNR) have discovered Northern Goshawks successfully breeding in the State for the first time since 2006. This encouraging news follows the senseless killing of a nesting female goshawk in 2011, whose chicks also died as a result of her death. The shooter was never found.

Following up on a lead provided by two Garrett County residents last month, DNR biologists found an active goshawk nest with two healthy chicks and confirmed last week that the young birds had successfully fledged. DNR suspects that the pair ─ the only known Northern Goshawks in western Maryland ─ consists of the male from the 2011 nest and a new mate.

Northern Goshawks are a shy but spectacular hawk of wild, mature forests. They are sensitive to disturbance and human activity, so their presence is indicative that some western Maryland forests are reaching the mature conditions required for breeding habitat.

Nearly 100 years ago aggressive timber harvesting in the mountains of Maryland caused deep forest species, such as goshawks, to disappear. Due to DNR’s current forest and habitat conservation efforts, many of these once rare or absent species are returning. State biologists are optimistic that sustainable conservation of forests and Natural Areas will support continued recovery and expansion of the Northern Goshawk in western Maryland.

This article was produced by the Maryland Department of Natural Resources.