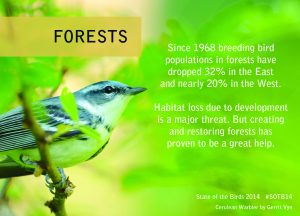 The State of the Birds 2014 report finds populations declining across key habitats. It also reveals successes, including work of AMJV partners, where conservation investment is leading to recovery.

State of the Birds 2014 – the most comprehensive review of long-term trend data for U.S. birds ever conducted – finds populations declining across several key habitats and includes a “watch list” of bird species in need of immediate conservation help. The report also reveals, however, that in areas where a strong conservation investment has been made, bird populations are recovering. An example of this in the report is the work of state and private partners in the AMJV, who with support from the National Fish and Wildlife Foundation and NRCS Working Lands for Wildlife Initiative have created 28,000 acres of early successional forest for Golden-winged Warbler and American Woodcock.

Authored by the U.S. Committee of the North American Bird Conservation Initiative(NABCI) – a 23-member partnership of government agencies and organizations dedicated to advancing bird conservation – the report is based on extensive reviews of population data from long-term monitoring. It looks to birds as indicators of ecosystem health by examining population trends of species dependent on one of seven habitats: grasslands, forests, wetlands, ocean, aridlands, islands and coasts. The report was released at a press conference at the Smithsonian Castle in Washington D.C. on September 9 and included talks by U.S. Fish and Wildlife Service Director Dan Ashe and Smithsonian Migratory Bird Director Peter Marra. AMJV Coordinator Todd Fearer attended the conference as the Migratory Bird JV Program representative on the NABCI Committee.

Of particular interest to the Appalachian region, analyses of long-term monitoring showed forest-dependent birds have declined nearly 32 percent in eastern forests since 1968. Efforts to conserve large swaths of forests, such as the many public-private partnerships already established in the Appalachian Mountains, will be essential to help declining forest-dependent species like the Golden-winged Warbler and Cerulean Warbler. In addition, a considerable amount of birds on the report’s “watch list” and requiring immediate conservation attention included neotropical migrants that breed or migrate through the Appalachians and winter south of the U.S. border. Such species require international coordination. One positive precedent highlighted in the report was the Cerulean Warbler. While its numbers are still declining, it has benefited by international collaborations to not only create healthy breeding habitat in the U.S., but good wintering habitat in Colombian coffee-growing landscapes. You can read the full report here: http://www.stateofthebirds.org