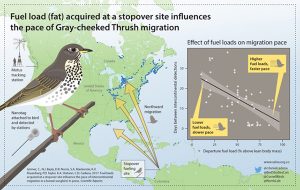 A new study finds that the number of days it takes for a bird to migrate to its breeding grounds is directly related to conditions at just a single stopover site. These crucial migration rest stops can determine how far the bird can fly non-stop and whether or not it will reach its breeding grounds in time to reproduce.

Researchers from seven institutions in Colombia, the United States, and Canada conducted the study, just published in Scientific Reports. Scientists tracked 133 Gray-cheeked Thrushes fitted with miniature radio transmitters called nano-tags as the birds travelled from a recently discovered stopover site along the Caribbean coast of Colombia to their final destinations in Canada and Alaska. The data reveal remarkable non-stop flights of up to 3,500 km (2,175 miles). Researchers also discovered that thrushes that were able to “fill up the tank” in native tropical forest at the Colombia stopover site completed their journey much faster than birds continuing on with small reserves of fuel (body fat).

“We really wanted to know how habitat loss or the use of different habitats might affect the success of migration,” says the study’s lead author Camila Gómez, who is completing her Ph.D. at the Universidad de los Andes in Colombia. “Showing that birds with smaller fuel reserves took up to 30 days longer to migrate to Ontario, for example, than birds leaving Colombia with large reserves, was a major breakthrough.”

Taking up to a month longer to migrate means more Gray-cheeked Thrushes could could die during the journey or even miss their breeding season entirely. Finding sites where birds can quickly refuel seems to be a key to a successful long-distance migration. The remarkably long non-stop flights of the well-fed fast flyers were also a surprise.

“When we received news of a bird that flew 3,255 km from Colombia to Indiana in just 3.3 days, we thought there must be an error in the data,” says co-author Nick Bayly from the Colombian NGO SELVA. “We kept thinking, why wouldn’t the bird stop further south? But it seems that if birds have enough fuel and flight conditions are good, they just keep going, flying day and night.”

“We used to think that landbirds used lots of stopover sites along the length of their migration route, rather than stopping at just a few key places,” says co-author Ken Rosenberg from the Cornell Lab of Ornithology. “This study not only highlights how important the Sierra Nevada de Santa Marta stopover is for Gray-cheeked Thrush migration, but also the urgent need to determine where other species are stopping to refuel so we can take those sites into consideration for conservation planning.”

The Motus Wildlife Tracking System used in this study is a program of Bird Studies Canada in partnership with collaborating researchers and organizations. The system consists of more than 300 automated receiving stations that record signals from tiny radio-transmitters, making it possible to track individual birds across continents with great precision.

Article by Cornell Lab of Ornithology.