Posted on Tuesday, July 26th, 2016 by aadmin | Comments Off on Threatened Birds Recovering Thanks To Endangered Species Act Protection 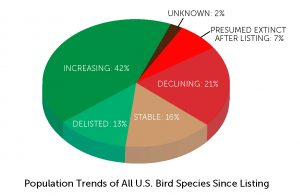 A report released today by American Bird Conservancy contains some good news for U.S. mainland birds: 78 percent of the birds listed as threatened or endangered under the Endangered Species Act (ESA) have populations that are now stable, increasing, or have recovered enough to be delisted. The Endangered Species Act: A Record of Successanalyzes population trends and recovery success for all U.S. listed birds, including those in the Hawaiian Islands and U.S. territories.

“Thanks to the Endangered Species Act, twice as many populations of listed birds are increasing as are decreasing,” said Steve Holmer, Senior Policy Advisor for American Bird Conservancy and the author of the report. “Meanwhile, species such as the Bald Eagle, Peregrine Falcon, and Brown Pelican have rebounded sufficiently to be taken off the list of endangered species.”

“This is a strong signal that the ESA works,” Holmer said.

“The dire situation for Hawaiian endangered birds is in part a result of inadequate recovery spending. Hawaiian birds account for more than 25 percent of all listed birds, but received only 6.7 percent of federal recovery spending for birds in 2014,” said George Wallace, American Bird Conservancy’s Vice President for Oceans and Islands. “The U.S. Fish and Wildlife Service has been working diligently to increase its recovery efforts in Hawaii, and is now spending 18.4 percent of its bird recovery funds on Hawaiian birds, but the population trends indicate still more needs to be done to reverse current declines.”

ABC staff are engaged in recovery efforts for Hawaiian birds, including Palila, a rare native honeycreeper that was among the first species to be listed under the ESA. “To prevent the extinction of Palila, we are working with the State of Hawaii to protect and restore habitat from non-native sheep that damage and kill the native trees used by the birds for food and nesting,” said Chris Farmer, American Bird Conservancy’s Hawaii Program Director. “And for the Millerbird, a successful translocation from Nihoa to Laysan Island was completed in 2012, increasing this species’ chances for survival.”

Even though the Endangered Species Act is working, it is under attack by some members of Congress.  In recent years, individual species such as the Greater Sage-Grouse have been targeted for listing exemptions to prevent ESA protection.

“Instead of undermining this effective law, Congress needs to increase funding for species recovery,” said Holmer. “With so many listed bird species showing increased populations, there is hope that we will soon see more of these species no longer needing the emergency protections of the ESA.”