Posted on Tuesday, July 21st, 2015 by aadmin | Comments Off on Through Partnerships, Golden-Winged Warbler Thrives 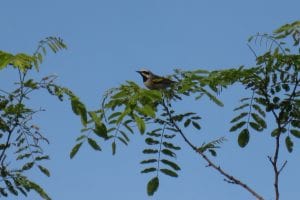 One species that enjoys the West Virginia Appalachian environment for breeding is the golden-winged warbler, but habitat has been hard to find.

There was great excitement when Idun Guenther, a wildlife biologist with the state’s Department of Natural Resources, spotted two golden-winged warbler males on the private property of Julia and Estil Hughes.

The Hughes partnered with USDA’s Natural Resources Conservation Service (NRCS) on a landscape initiative called Working Lands for Wildlife (WLFW). Through NRCS and the U.S. Fish and Wildlife Service, habitat for a variety of species on privately owned land is restored.

“Collaborating with partner agencies is an excellent way to combine expertise and funding to reach a common goal.  This is an exciting time for all of us knowing we have the opportunity to create a sustainable habitat for the golden-winged warbler here,” said Louis Aspey, NRCS state conservationist for West Virginia.

For the past four years, NRCS has partnered with the West Virginia Department of Natural Resources (DNR) and Division of Forestry (DOF) through joint positions.  Employees from partner agencies work in NRCS field offices on projects mutually beneficial to both agencies.  In this case, the golden-winged warbler is the focal species for conservation in West Virginia, which began in 2012.

Based on scientific research on the species, Guenther designs how a golden-winged warbler habitat should look like, while Putzulu determines what shrubs, plants and trees need to be removed or retained.  Information gathered is shared with DNR and DOF for their use in survey reports.

“This sighting is exciting news for all parties involved because it shows that if we help create and sustain habitats, the golden-winged warbler will thrive in West Virginia,” said Greg Stone, South Area Conservationist.  “This habitat was specifically created to support the Working Lands for Wildlife Initiative.  There is no documentation showing presence of the golden-winged warbler in this county prior to this sighting.”

Although the golden-winged warbler is not listed under the Endangered Species Act or a candidate for listing right now, it is listed as a species of concern by the U.S. Fish and Wildlife Service. It’s important to take immediate conservation action to prevent status change rather than trying to recover the species after a listing.

“Our stake in this initiative is to establish golden-winged warbler habitats to help the species flourish in West Virginia,” said Aspey.

The golden-winged warbler is not the only species to benefit from voluntary conservation. Recently, because of proactive steps by private landowners to restore and improve habitat, the Louisiana black bear and Oregon chub was removed from the ESA list, and listing was not required for the Bi-State sage-grouse or the Arctic grayling.  Learn more about NRCS’ wildlife conservation efforts. To get started with NRCS, visit your local USDA Service Center or www.nrcs.usda.gov/GetStarted.