Posted on Wednesday, August 9th, 2017 by aadmin | Comments Off on USDA Releases Five-Year Strategy to Improve Forest Health in Appalachia 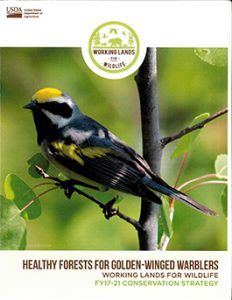 The U.S. Department of Agriculture (USDA) today released a new five-year conservation strategy to support private landowners managing for healthier forests in the Appalachian Mountains, part of an ongoing effort to help the golden-winged warbler rebound, and avoid the need for regulation of the species. This strategy serves as a game plan for how USDA’s Natural Resources Conservation Service (NRCS) and its conservation partners can best meet their goal of helping landowners adopt bird-friendly practices on more than 15,000 acres of young forests and shrublands over the next five years.

The golden-winged warbler has suffered one of the steepest population declines of any songbird species in the last 45 years, largely attributed to the decline of young forests that the migratory bird needs for nesting.

NRCS selected the golden-winged warbler in 2012 as a priority species of Working Lands for Wildlife (WLFW), the agency’s premier, science-based partnership for wildlife conservation.  The golden-winged warbler, with a black-and white facial pattern and touches of yellow on its wings and head, breeds in the deciduous forests of the Great Lakes and Appalachians and then spends its winters in Latin America.

Appalachian forests have widely suffered from “high grade” or “diameter limit” harvests that remove only the most valuable trees. NRCS forest conservation practices renew the health, economic and wildlife values of deciduous forests. With about 70 percent of the region under private ownership, management decisions of landowners are important to the golden-winged warbler and many game species including turkey, deer and grouse.

“Many of our nation’s forests have fallen into poor health, and we have a tremendous opportunity in Appalachia to make a difference both for landowners and for wildlife,” NRCS Acting Chief Leonard Jordan said. “Our effort is to diversify the age classes of trees in forests, creating patches of forests of different ages, and for the golden-winged warbler, we’re focusing on those younger forests within landscapes dominated by mature forests.”

This strategy provides guidance on how and where the agency will work with landowners to address habitat loss. It relies on new priority areas for conservation, which were developed last fall with support from American Bird Conservancy and assessment data from Indiana University of Pennsylvania, Cornell University and other partners. These priority areas use population, forest cover and land use data to direct conservation actions to key areas across the seven-state range.

For WLFW, NRCS targets conservation in Appalachia, which lost 43 percent of its young forest habitat since the 1960s. From 2012 to 2016, landowners have restored more than 13,000 acres of habitat through WLFW partnerships.

Research shows the conservation practices are benefiting the golden-winged warbler. The largest assessment of its kind is now underway, and the first three years of data show high nesting success in forests managed using NRCS practices.

WLFW and other partnership efforts to promote habitat restoration on private and public lands are working. In 2015, the U.S. Fish and Wildlife Service determined protections under the Endangered Species Act were not needed for the New England cottontail and greater sage-grouse, both WLFW target species, largely because of collaborative efforts to conserve habitat on public and private lands. Other successes include the Oregon chub, Arctic grayling, greater sage-grouse, Bi-State sage-grouse and Louisiana black bear.

Article by U.S. Department of Agriculture.