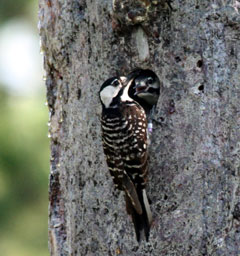 The woods around Marine Corps Base Camp Lejeune in North Carolina have, since 1986, featured an ever increasing rat-a-tat-tat sound that has nothing to do with weapons qualification training. The sound marks the 28-year recovery of the red cockaded woodpecker, said by some to be the spotted owl of the southeast because of its status on the endangered species list.

Critical to the birds’ comeback has been Jeff Walters, the Harold Bailey Professor of Biological Sciences in Virginia Tech’s College of Science. A life-long bird lover, Walters has been working with, among others, the Marines and the U.S. Air Force at Eglin Air Force Base, Fla., to help the woodpeckers make a comeback from their spot on the endangered species list – and his strategies for doing so have worked remarkably well.

“In the late 1980s we had results from our basic research that suggested why the management strategy we were using at the time wasn’t working,” Walters explained. “Turns out the old strategy just wasn’t compatible with the dynamics of the birds’ social system.”

The RCW is one of a rare type of bird that is known as a ‘cooperative breeder.’ In the Blacksburg area, only the common crow uses a similar social system. Birds in this system, mostly males, live in family groups where the young remain with their parents instead of finding their own territories. The birds, called helpers, are actively involved in feeding the young, sitting on eggs, creating nesting cavities, and defending the territory. But they do not breed.

“The males may eventually move away to become breeders on another territory, or if the father dies, the oldest son will inherit the breeding position on the family territory,” Walters said. “Some birds that we’ve found have remained helpers for as long as 11 years.”

With his Department of Defense funded research at the bases, Walters has tried to figure out why the species was cooperative instead of the young flying off to find their own breeding spaces.

“The hypothesis I developed was that it was because of the nesting cavities they use,” he explained. “The cavities are so valuable that the birds competed for territories that already had cavities on them rather than claiming an unoccupied area or an otherwise nice habitat without cavities. Staying at home and waiting for an open breeding position on a territory with cavities, be it a home territory or a neighboring one, makes sense in a species that is so picky about what area is acceptable.”

Although a number of birds use or make holes in trees as nesting areas, the RCW is unique of all bird species in the world, in that it makes its nest holes in living pine trees instead of dead trees or in dead wood that is a part of living trees.

The strategy Walters decided upon was to figure out an acceptable drilling technique and to make cavities in an unoccupied habitat near current territories to see what would happen.

“Sure enough, helpers immediately left home and moved in to claim these suddenly acceptable new territories,” he said. “The previous management strategy didn’t recognize the importance of the cavities and had relied instead on providing nice pine habitat, which the birds never moved into. This of course, did no good at all since the problem was too few territories with cavities and not too few birds.”

In fact, Walters said, there were plenty of ‘extra’ adults (helpers) around, even in populations in decline and those populations were declining because the cavity trees were not being protected. When the trees were lost, territories went from good to unacceptable.

“It was the number of acceptable territories that was driving the numbers, not births and deaths of individual birds,” Walters explained. “Our new strategy, then, was obvious – install cavities in unoccupied spaces which we call ‘recruitment clusters’, to increase the number of family groups and replace lost cavities in existing territories to prevent reduction in numbers. We applied this strategy in a few areas as part of demonstration projects and it worked wonderfully.”

In fact, it worked so wonderfully, that Walters’ hypothesis and strategy turned into federal policy.

The Marine Corps base along the coast of North Carolina became the first area to test Walters’ development strategy and its success has broad implications because of the millions of acres across the Southeast which are managed for the RCW.

“My relationship with the base is very good, due largely to the fact they are keenly aware of the degree to which my work has reduced conflict between their requirement to recover the endangered woodpeckers under the Endangered Species Act and their military training mission,” Walters said. “We have a close working relationship down to the level of providing information about the use of individual acres of land by the woodpeckers.”

A single RCW territory runs about 150 acres and a population size of about 350 groups of the birds is required for recovery, meaning one population of the bird may require more than 50,000 acres.

“We know where every red-cockaded woodpecker on base lives, and which areas it uses to nest and forage,” Walters said.

In addition to the Marine base, Walters said he has works similar projects at Eglin AFB in Florida, where he’s been funded by DoD since 1996, and in the Sandhills of North Carolina where he’s been since 1983.

“The Sandhills study has been funded by DoD, the Department of Fish and Wildlife and the National Science Foundation since 1980,” he said. “The DoD is involved in this area because the study area includes parts of the Army base at Fort Bragg.”  The project also includes public and private land as well as property owned by the Nature Conservancy.

The Eglin and Sandhills populations were in rapid decline when Walters implemented his recovery strategy and since that time both populations have increased to the point they’ve surpassed the 350 group criterion for recovery. And to monitor their progress, Walters and his team band all the individual birds in a study population with a U.S. Fish and Wildlife Service aluminum leg band plus unique combinations of colored leg bands that enable the researchers to identify individual birds and follow them through their lifetimes.

“In North Carolina we have long-term data sets now that track the lives of all the birds we’ve banded for generations,” Walters explained. “These data sets are very valuable for addressing questions about life history, responses to climate change, and all sorts of other things about ecology, population biology, and evolution. So a primary goal now is to keep those continuous data sets going and all sorts of students and collaborators use those data sets to test a wide variety of ideas and hypotheses.”

“When Europeans first arrived here the RCW was likely the most common woodpecker in the Southeast,” Walters said. “Since then, it’s become the rarest, so we take great pride in our success and in knowing that the work we’ve done has played a large role in a species that everyone thought was headed for extinction, is now heading for recovery.”

This article was produced by the Virginia Tech College of Natural Resources and Environment.