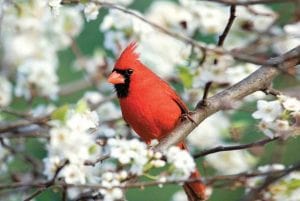 Many people recognize the most common bird species in Virginia, but according to Ashley Peele, a research associate with Virginia Tech’s Conservation Management Institute, there is still much that scientists don’t know about these species.

To try to fill those knowledge gaps, Peele is coordinating the second Virginia Breeding Bird Atlas. This statewide project sponsored by the Virginia Department of Game and Inland Fisheries will gather data collected by volunteer birders over a five-year period to determine where breeding birds are living and breeding.

“We tend to assume that common birds stay common,” Peele said. “We see them all the time so we don’t worry about them from a conservation perspective. Bird populations can begin to decline without us even realizing it. The atlas will provide an overview of all the birds in the state and assess the status of all species, not just the ones that we’re already monitoring.”

Another atlas of this type was conducted in the 1980s, but in order to remain current, birding atlases should be published every 15 to 20 years.

“We’re definitely due for a new one,” Peele said. “We want to document evidence that birds are breeding and where they are choosing to do so. We want to know how this compares to Virginia bird populations 25 years ago.”

In order to gather data most efficiently, Peele and her team use a system that divides the state into 4,400 atlas blocks, each measuring about nine square miles. From among those blocks, a subset of priority blocks are targeted first to ensure that each part of the state receives equal coverage.

“Once we survey those priority blocks, we can start filling in the gaps between them,” she said.

According to Peele, volunteers are recording more data than in most citizen science endeavors.

“Often birders are asked to do basic surveys to just identify and count birds. Instead of focusing on numbers, we want people to slow down and make behavioral observations,” she said.

Scott Klopfer, director of the Conservation Management Institute, housed in the College of Natural Resources and Environment, said that in addition to gathering valuable data about bird populations in Virginia, the project also highlights the importance of citizen science in natural resources management.

“Watching birds provides birders with a window into what’s going on in natural resources,” Klopfer said. “If people are keeping track of birds on their Saturday morning walks and we can harness that information, we can build a powerful tool to understand what’s going on with bird communities and the environment.”

The project’s 450 volunteers have completed their first year of data collection, having taken observations from 37 percent of the total atlas blocks and 45 percent of the priority blocks. So far, their work is paying off.

“In the first atlas, 191 species were identified as breeders in Virginia,” Peele said. “In the second atlas’s first year alone, we’ve already identified over 210 species and confirmed that 174 of those species are currently breeding.”

After collecting the data, volunteers submit their findings to the atlas’s own eBird portal, an online resource maintained by the Cornell Lab of Ornithology. eBird allows citizen scientists to log in and submit observational data that is then fed into Cornell University’s larger mainframe, enabling Peele and other researchers to analyze the data.

The European starling, northern cardinal, and American robin are among the most abundant species from the atlas’s first breeding season, which ran from March to September 2016. Additionally, five new breeding species were confirmed, including the Mississippi kite, magnolia warbler, and yellow-bellied sapsucker.

According to Peele, the volunteer-collected data have far-reaching implications.

“This research will help inform bird conservation plans for the Virginia Department of Game and Inland Fisheries, help researchers statewide gather information on conservation and management strategies, and improve general knowledge about what’s going on with bird populations in the state,” Peele said.

To keep up momentum from the first year, Peele said she hopes to expand the project’s volunteer base.

“We want to open up the field of bird conservation to the public and engage anyone who’s interested in birds and better understanding them,” she said.

According to Klopfer, volunteer birders can serve in a variety of roles.

“We’re looking for people all over the state, particularly where the population density is lower than places like Richmond or Northern Virginia,” Klopfer said.
Specifically, Peele is hoping to attract volunteers from western and southwestern Virginia, where the rural, less-populated grids allow diverse bird populations to thrive.

Klopfer also stressed the need for volunteers to serve in other capacities besides birding. In particular, he noted a need for volunteers willing to help birders who use traditional pen and paper recording methods to input their data into the online database.

“There’s a fairly large segment of the birding community that isn’t familiar with this online technology, and we don’t want data entry to be an obstacle for them,” he said.

Check out a short video about this effort.