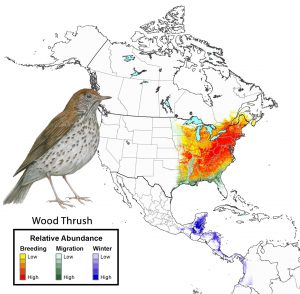 The animated map shows the Wood Thrush’s predicted distribution and relative abundance across all 52 weeks of the year.The animation illustrates the migratory movements of the species as its populations travel across North America. The brighter the color, the higher the expected count of the species on a standardized eBird count.

The data used to generate this animation were produced using a statistical model to predict the relative abundance of the population at specific times and locations by relating observations of birds from eBird to local environmental features derived from NASA remote sensing data. Please note that because these maps represent models of predicted abundance, they are intended to illustrate broad patterns of connectivity across regions and are not intended to accurately depict local distributions in any given week. As more and more eBird data become available, the accuracy of these predictive models will improve.

The lower map represents the average predicted relative abundance within the breeding season (red scale), in winter (blue scale), and during fall and spring migration (combined: green scale). These maps are the best representation we have of the total year-round distribution and abundance for migratory species, illustrating connections between regions and major habitats.

About Wood Thrush Abundance and Distribution
The Wood Thrush is a widespread and common breeder throughout the temperate forests of eastern U.S. and southeastern Canada, wintering in tropical evergreen forests on the Gulf-Caribbean slope of Mexico and Central America. Migrants are most abundant in the southern Appalachian Mountains and along the Gulf Coast. Wood Thrushes are sensitive to forest loss and fragmentation on both the breeding and wintering grounds, and their populations have been declining steeply since 1970. The maps of relative abundance show that Wood Thrushes concentrate in winter in an area much smaller than during the breeding season.